Everything happens for reasons, right? For some kinda reason anyway… I haven’t figured them all out yet.

But if it weren’t for Stevan I wouldn’t have had Jovanna. So obviously there was a reason for all that shit. 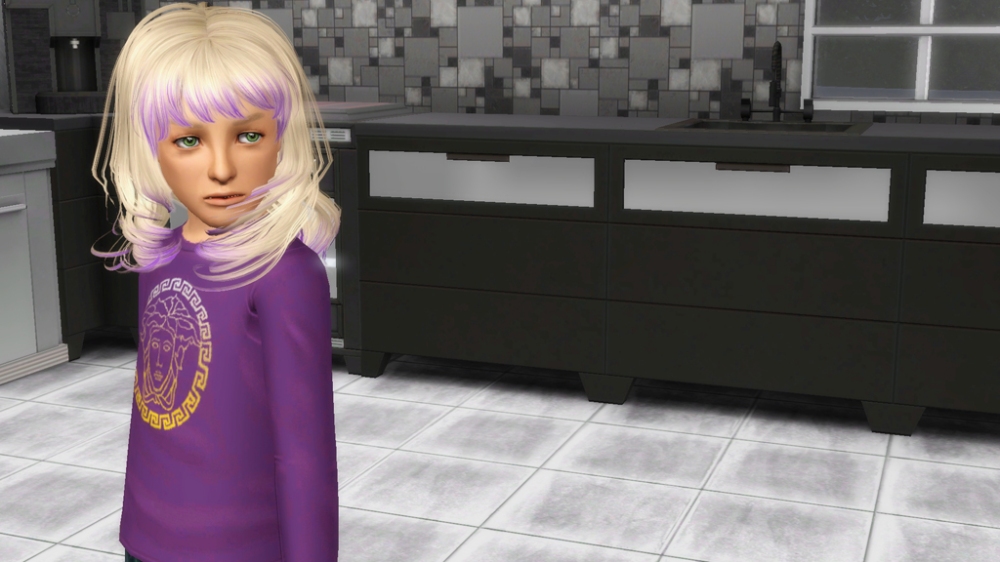 She was the sweetest, gentlest little girl, even when she was a baby. Never complained much, even when her momma had practically deserted her in my post-pardom and post-Stevan depressed state. She’s so beautiful, and I don’t even see Stevan in her anymore, I just see her — her sweet eyes and forgiving smile.

Blue: “Because you don’t have a dad.” 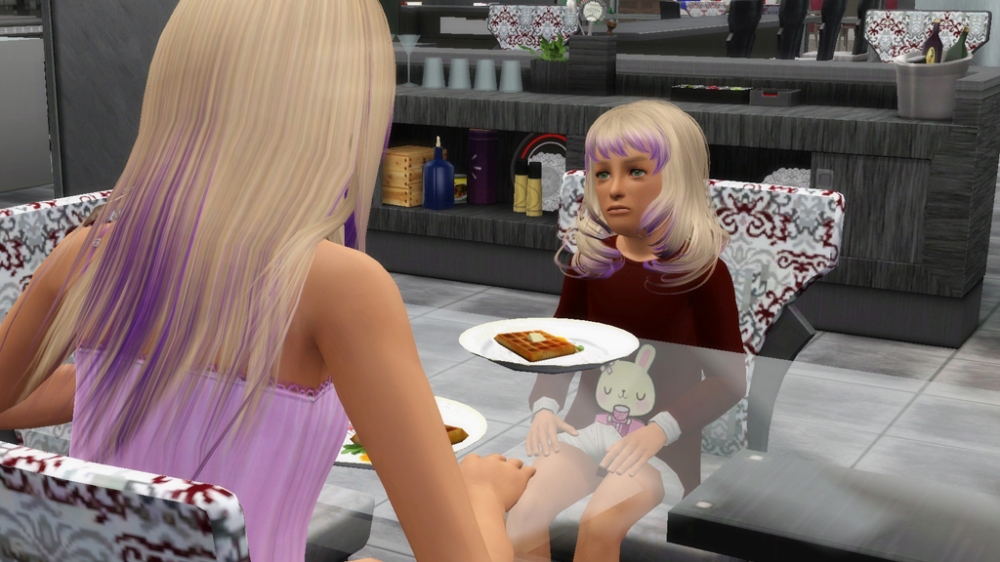 But yeah, there was that…

“You have a dad, sweetie. Everyone has a dad. He just… doesn’t live here.”

“Where does he live? Can we go visit him?”

Her face kinda broke my heart. I hoped she wouldn’t see my eyes glossing over with almost-tears.

It hit me that my little girl would need to see her dad. Or else she would grow up constantly searching for him, like the adopted kids that didn’t know their parents. What a fine fuckin’ mess I’ve made of my life, to have to raise a child without her dad. Without any dad at all…? Well, that would remain to be seen.

I told her that night before bed, “We’ll see your daddy soon, okay baby?” 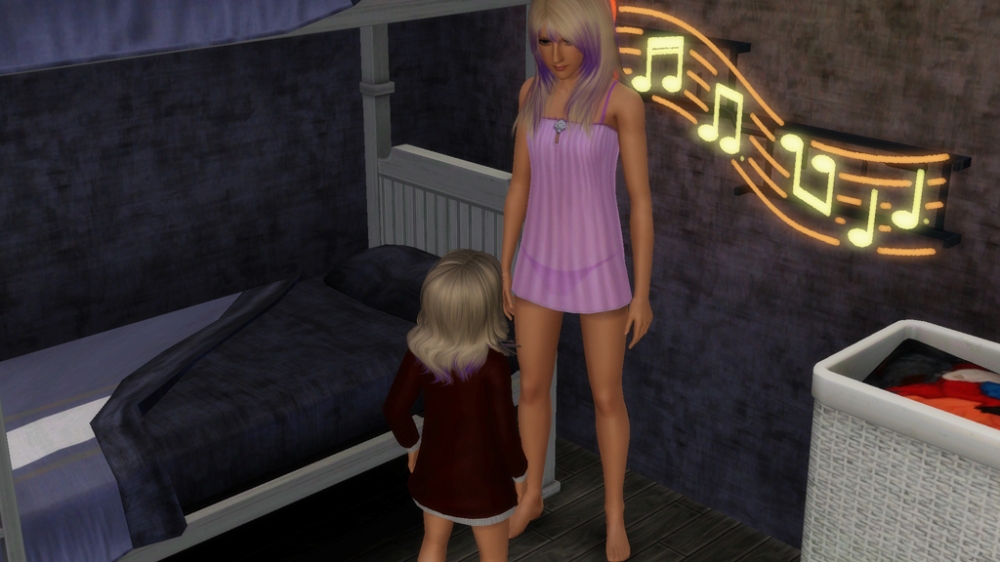 “Okay Mommy! That would be awesome! Does he like books? Will he read to me, or play guitar for me like you do?”

I laughed, “I don’t think he plays guitar. But I’m sure he can read.” 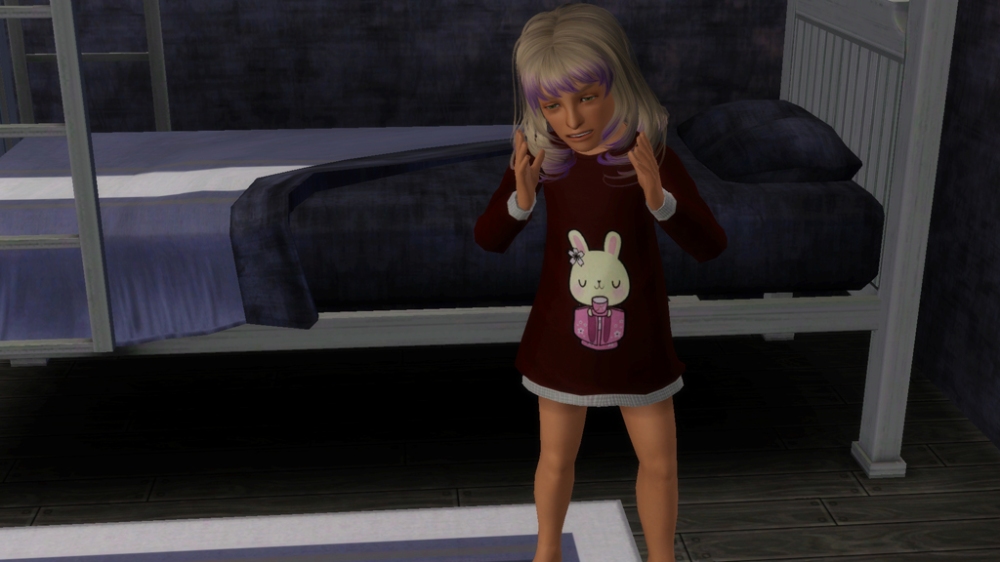 I didn’t exactly know how we would see Stevan, but I guess I had to figure something out. He and Flan were still together… and I had even heard rumors that he knocked her up too. Although honestly I should say I knocked me up, because I was the one who initiated it. Get a few drinks into me and I turn into a dumb bimbo.

Like on my second date with Jaxen for instance. Yeah I decided to give him a chance after all.

We were kinda friends anyway, so I called him one night after he sent me this letter. Tegan was out with Armando and Mom was out with her young gay boy friends. I don’t know why Daddy didn’t go but whatever…

We went to Zumi’s Party Place because it was close by the house. I got us drinks and brought them outside ’cause it was a nice spring night and it was kinda warming up.

I dunno why he got so offended cause all I said was “You’re just a little diva aren’t you”, when he mentioned he didn’t like strawberry martinis. 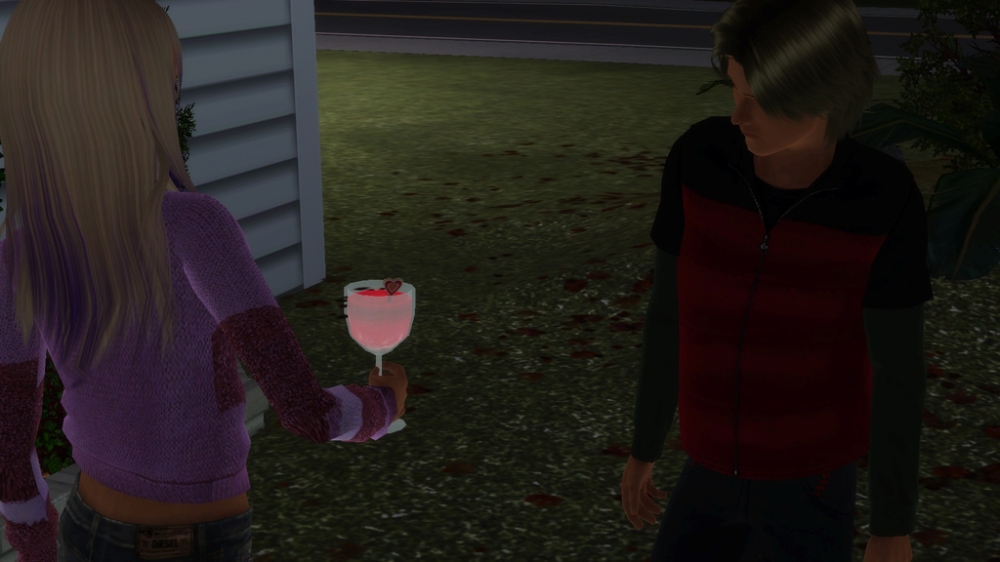 And he stormed off!

So much for trying to be nice! Some people can’t take a simple comment I guess. Hmph. More for me then.

Then one day I heard the news.

I passed him on the street in the car, and he seemed pretty damn happy. 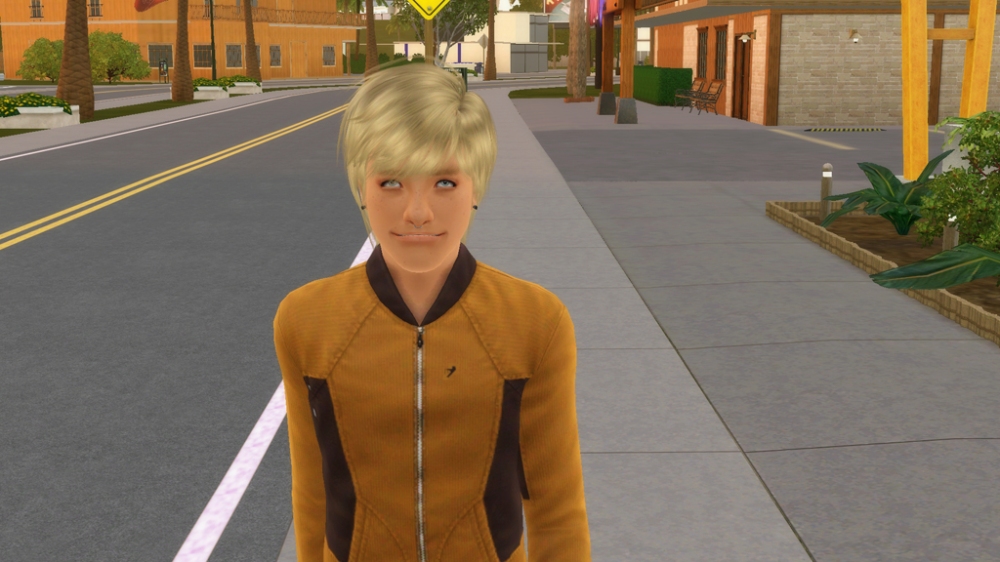 And that was when Mom told me about Phoenix.

She had met him sometime the winter, when there was a bunch of people making igloos and snowmen outside our theatre. They were blocking the path and people were calling and complaining so she had to go over. She never said anything to me about him then, but i guess she saw him again or something, or just called him out of the blue. 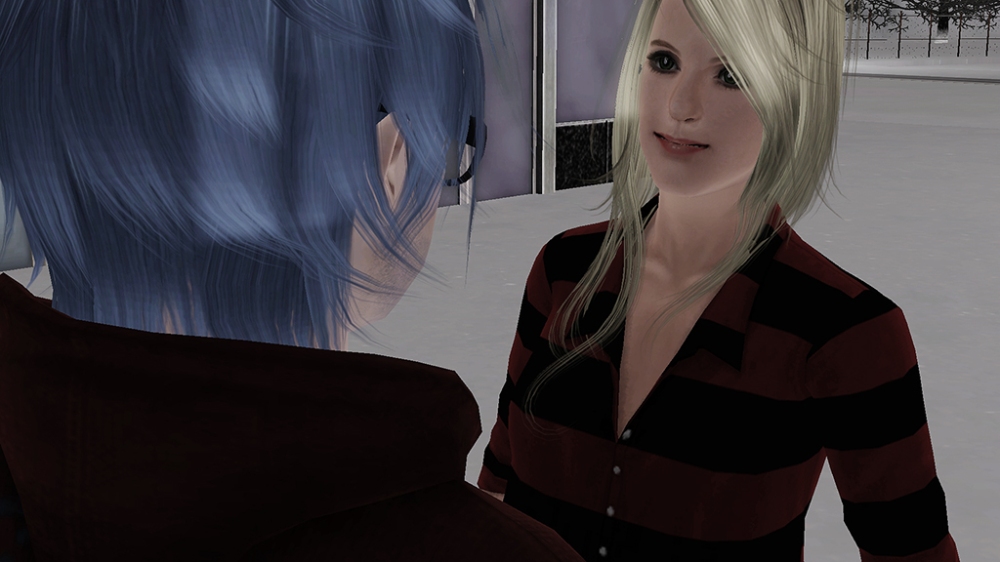 “Phoenix? What kind of name is that? Wasn’t that the name of the Breaking Bad episode where the plane crashed? Does that mean I’m gonna like crash and burn if I meet him?”

“Just have an open mind, Jemma. He seems like your type. He’s kinda out there.”

“That’s a compliment, you know. Being eccentric is like being different in a nerdy cool way.” 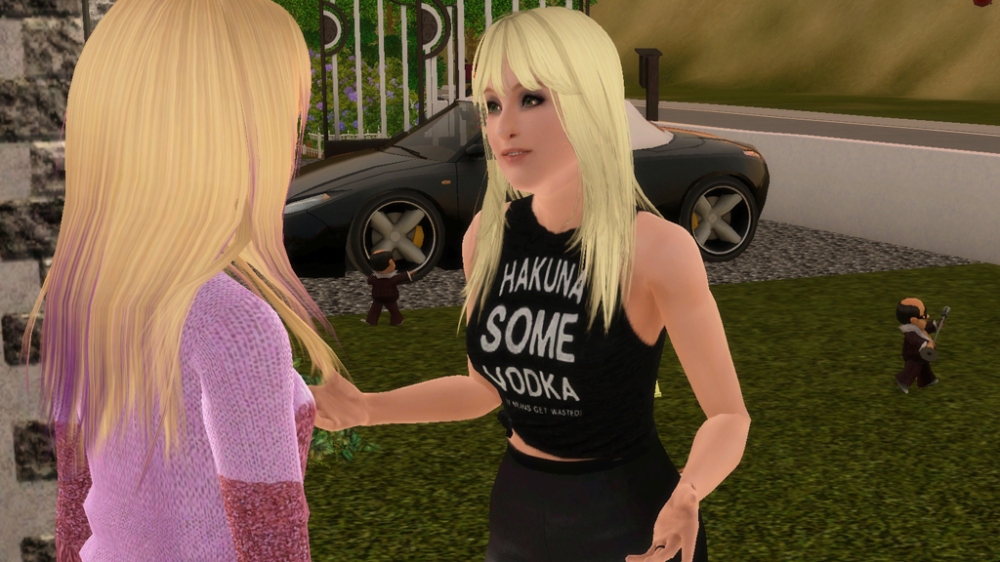 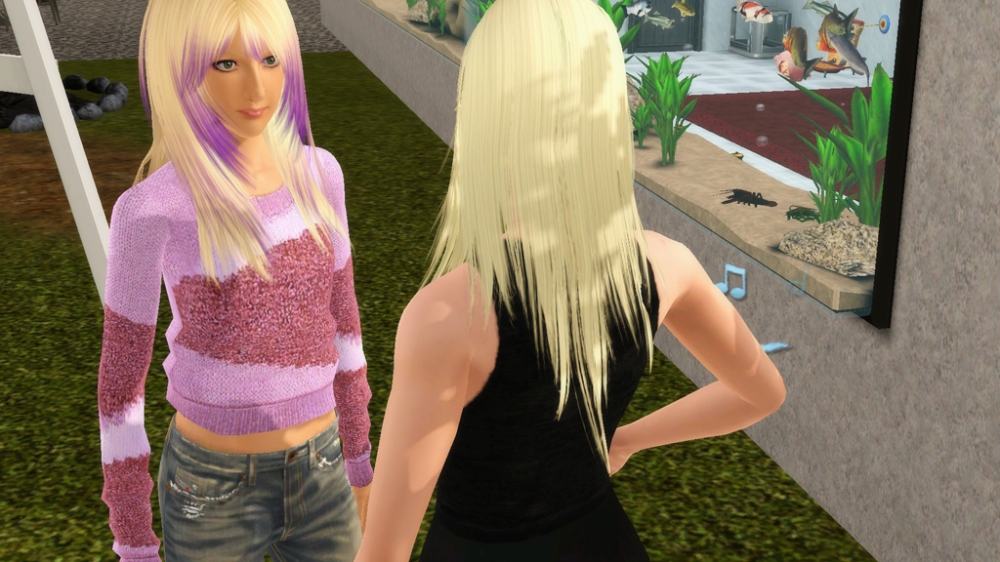 “Oh hey Norman… thanks for calling, yeah I made it home okay. Thank goodness ’cause the cab driver was all over the road. Or maybe it was just me… bahaha!”

I swear my mom was crazy sometimes. Oh well, she gotta have a life too I guess.

A few days passed, and we got the balloons and stuff ready for the party. Spice brown balloons for Tegan, and red for baby Maxwell.

Tegan was not in a good mood at the party. Gawd… did I have teenage mood swings like that?!

…or if she still likes him. But geez, we can’t be like, fighting over the same guy. She can have him, ’cause he probably hates me now anyway.

‘Gosh… did he see me? Okay Jemma, don’t listen to the negative voices in your head. Just go over and talk to him.’

“Hi. So you’re the guy Mom wanted me to meet? You’re the only one here with blue hair.”

“How observant of you.”

Wow. He had, like, the coolest, bluest hair I’d ever seen. And his eyes! They were so gentle-looking. And what a honker of a nose, but… it was kinda cute. I have a big nose too, and it suits me I guess.  He just stared and smiled after he said that, and I went all sorts of flustery.

What should I say? 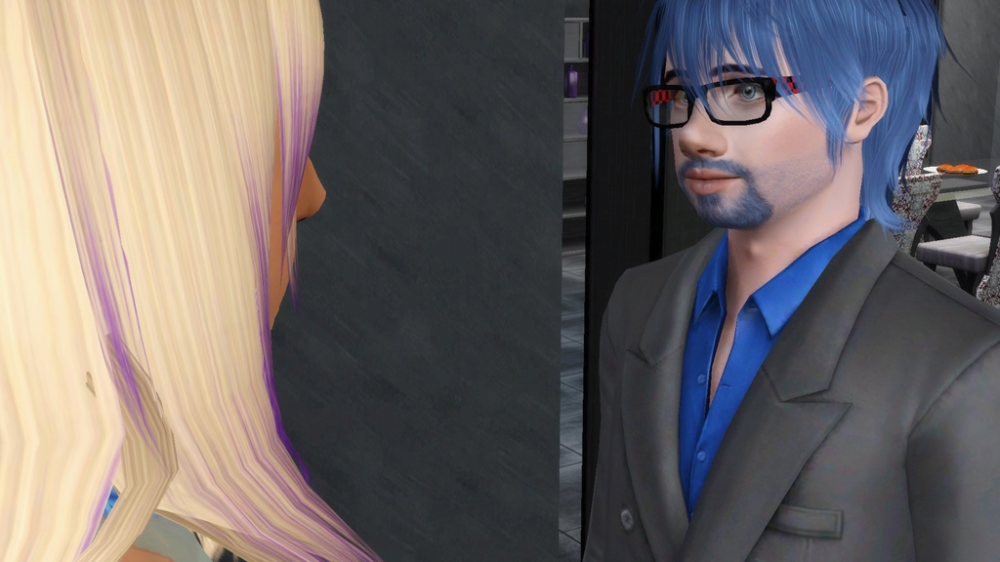 “Your hair is really cool.” 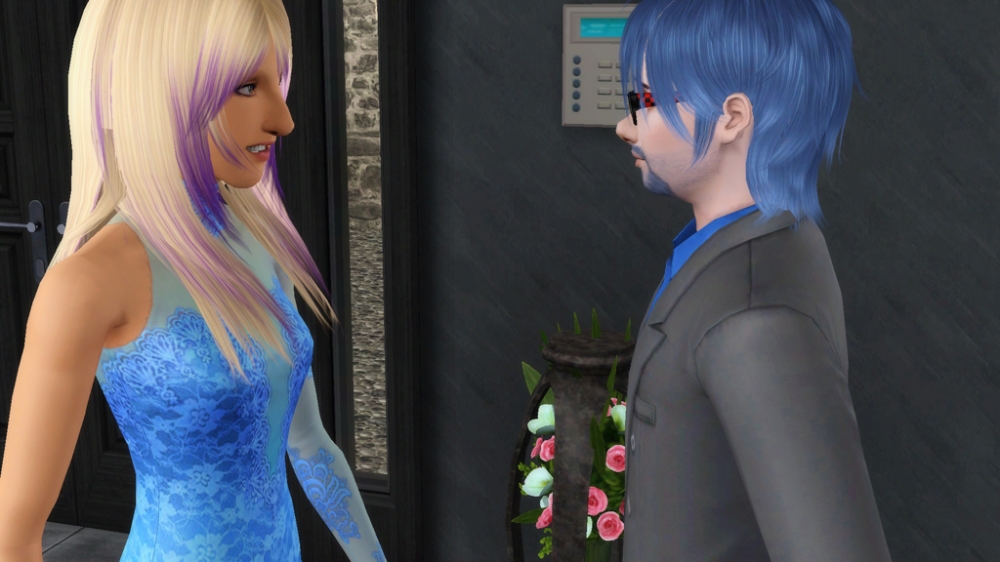 He smelled like….. blueberry sherbet. I was glad I put on my new Nicki Minaj perfume tonight.

The magical moment was interrupted when Mom called for us to watch Maxie blow out his candles.

“So hey, we gotta go get our cake on. Heh. Talk you you after, Phoenix?” 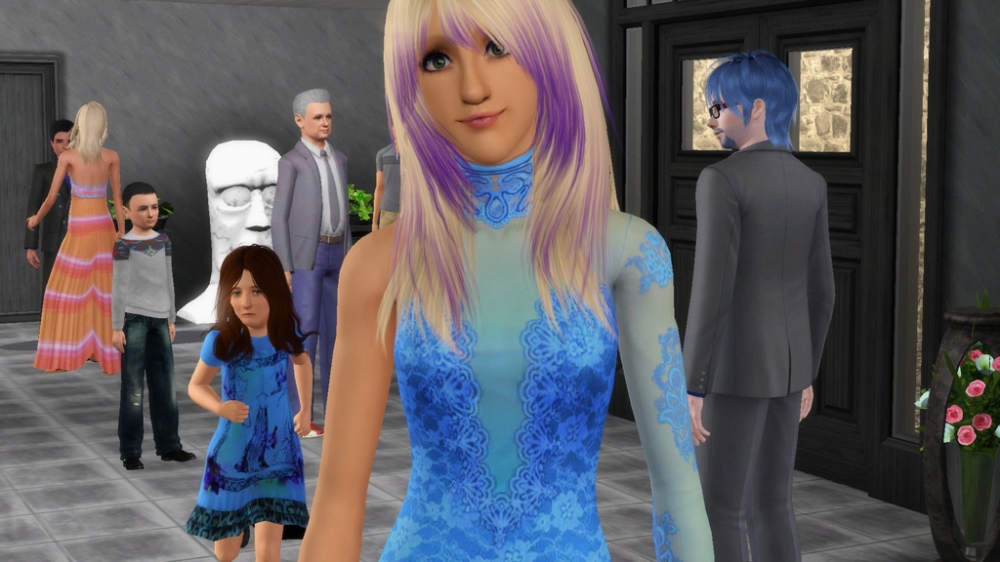 New Sims appearing in this episode:

The ‘blue-haired’ Phoenix Severus from the Nova Legacy by Lenei14.